Is a policy tool by which the Federal Reserve can increase the money supply. The logic being that as the money supply increases, the cost to borrow money (interest rates) will drop. As money becomes cheaper to borrow, more companies and individuals will take out loans to invest in factories and buildings or to purchase consumer goods like new cars and vacations, thus growing the economy.

How Does the Federal Reserve Do This? 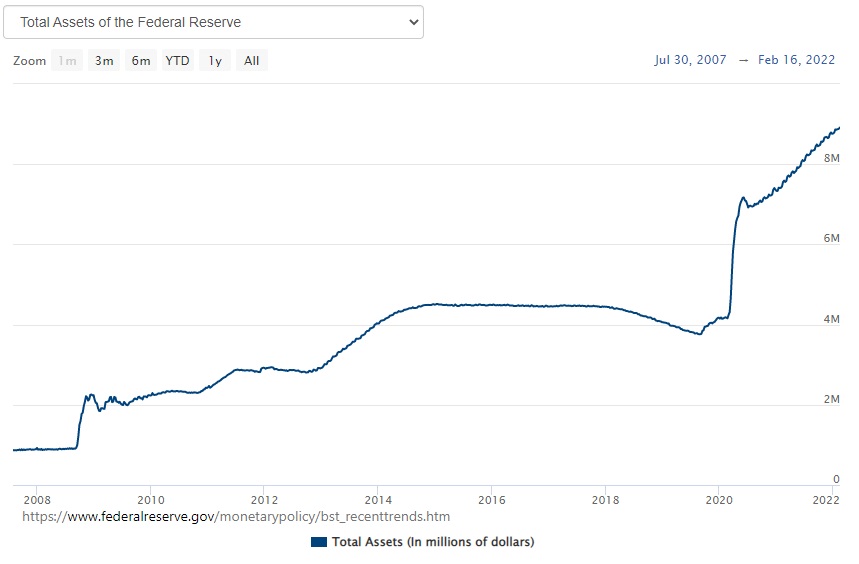 So How Much Money Has Been Created?

The chart above shows the amount of assets the Federal Reserve owned over time. You will notice on the right side the line goes straight up from around $4 trillion to over $6 trillion. This means the Federal Reserve has purchased over 2 trillion dollars in assets in the past month! And how did it pay for the 2 trillion in assets? You guessed it, accounting entries!

Sounds Too Good to Be True!

History tells us that printing money, whether using the old fashion printing press or accounting entries, frequently leads to inflation. Inflation is another way of saying a dollar does not buy what it used to. Human nature being what it is, any individual or group of individuals will over time fail to resist the temptation to continue to create money out of thin air. One prediction some have made is that the Federal Reserve will keep growing the money supply through buying more and more assets. There is even talk that the Fed could start buying stocks! I'll leave you with the following quote by Lord Acton, "power corrupts and absolute power corrupts absolutely."